The 2009 festival took place on Mill Lane in the heart of the University district and in sight of the River Cam and comprised a programme of more than 98 short films from around the world shown over four days!

With more than 60 World, International, European and UK Premieres, our competition and panorama programmes showed the best films originated on the brilliant Super 8 format.

More than 25 filmmakers from across Europe joined the festival for a great four days of networking and films.

Winners of the 2009 festival 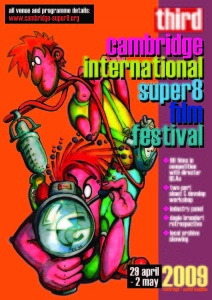 3 special mentions were also given for:

You can consult our 2009 festival blog for more details.

Download the 2009 festival programme either as Single page or 2009 Program Book (approx 2.5Mb each .pdf).

What the press says about the 2009 event