Cambridge Super 8 Group are delighted to announce our involvement in a major forthcoming exhibition. Co-curated in collaboration with Smiths Row in Bury St Edmunds, Flicker: Artists & Super 8 will examine how 20th and 21st-century artists have worked with or been inspired by the Super 8 format and low gauge film-making. From iconic film-maker Derek Jarman through to contemporary visual artists including Giovanna Maria Casetta and 2012 Turner Prize nominee Luke Fowler, Flicker will explore how analogue film, through its preservation and continued practice as a moving-image medium, remains a rich source of cultural heritage and creative practice in our digital age. A lively programme of events will accompany the exhibition, including screenings at the Abbeygate Picturehouse, live performances, artist talks and film-making workshops. The exhibition will bring together work by a broad range of international artists to demonstrate the accessibility, adaptability and experimental nature of Super 8.

To accompany the exhibition there will be a season of screenings in the newly refurbished Abbeygate Picturehouse in Bury St Edmunds, in association with Picturehouse Cinemas. A special cinema programme will include a documentary double-bill examining the impact and continued allure of Super 8 from the 1980s through to today. Super 8 (1986) is a seminal documentary produced for Channel 4 Television by Jo Comino and James Mackay. Super 8: Mon Amour (2011) directed by Rémy Batteault is a French fantasy documentary told from the point of view of a camera. Derek Jarman – A Life in Super 8 will feature a rare screening of Glitterbug (1994) followed by a conversation with Jarman’s friend and longtime collaborator James Mackay. Thierry Bonnaud will present Flicker: The Official Selection, a showreel of artists films submitted from around the world. 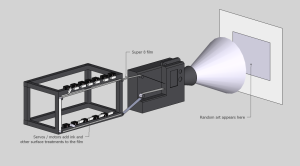 There will also be a series of free screenings presented by the Cambridge Super 8 Group. Details will be released shortly.