So Long, Kodachrome
Jim Granato / 2010 / United States / 7 mins
So Long, Kodachrome is an ode to super 8, and the most beloved film stock every made. While paying huge respects to the format, this original sound super 8 short also pays homage to an American 70′s landmark film.

Putain Lapin / Bitch Rabbit
Guérin van de Vorst / 2010 / Belgium / 10 mins
Putain Lapin is about the meeting between a whore and a bear, that she thinks is a rabbit. It’s also about a desolate place where people get lost and leave by charters.

Enterprisse
Mauricio Quiroga Kiro / 2010 / Bolivia, Argentina 9 mins
The man, the city, the machine. Once in the game, follow the instructions.

Collide-o-scope
Naren Wilks / 2010 / United Kingdom / 3 mins
Using four super-8 cameras a man in a white room replicates himself. He and his clones have until the cartridges in the cameras run out before they disappear.

Don’t miss this opportunity to see the best of the Festival 2011!

The winners of the 5th International Cambridge Super 8 Film Festival are:

The winner of the 2010 audience prize Lionel Laget will shoot his new film in Cambridge next Monday and Tuesday. For his new film, he is looking for a man to play the college master part and a woman to play a student. He is also looking out for some costumes : roadsweeper + broom, college graduation gown.

If you can help or want to be involved, please contact Lionel at l_laget@yahoo.fr or come to the festival and meet Lionel there.

Have a look at our new festival programme

A couple of days are left to prebook your tickets. After this, they will be available at the doors on the day of the event. 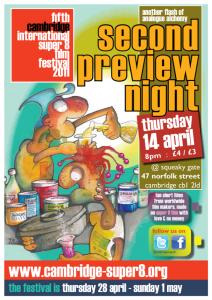 Come and see more short films that we have received for the festival !

It is a unique opportunity as many of these shorts won’t be shown at the festival !!!

A few of the opportunities available include helping with administration, marketing, publicity distribution, festival events and hospitality.

Even though we’re busy finalising details for this year’s festival we thought we’d take some time out and give you a sneaky peek at some of the great Super 8mm films that we have received. The fun starts at 8pm, so come and join us for a great night of inspirational shorts.
Preview night 1
Basement of CB2 cafe

Film submissions for the 2011 festival are now open. The deadline for submission is the 26th of November 2010.