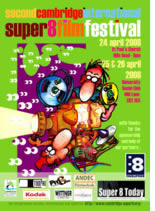 All genres were represented (animation, fiction, documentaries and experimental film), showing the diversity of films submitted and versitility of the Super 8mm format.

Winners of the 2008 festival

In addition, two films received special mentions from the Jury: